A total of $102,700 in CPA funding was used to complete Veteran's Park.  The initial construction of the fields was funded with a bond release.  However there was insufficient funding to complete the facility.  Thanks to the assistance of Community Preservation funds we were able to complete 2 baseball fields, a walking path as well as fencing and site furnishings.  This park is currently used by 3 baseball leagues consisting of several hundred local children as well as countless visitors using the walking path around the fields.

A total of $186,195 in CPA funding in addition to a $66,000 grant was used to repair the roof and paint Town Hall.  The Mendon Town Hall was constructed in 1840.  Over the years this historic building has seen use as a community meeting space, school house, and town offices.

A total of $80,000 in CPA funding was used to resolve humidity and drainage problems in the town vault.  In addition funds were used to preserve historical documents dating back to the 1600's including an original copy of the Declaration of independence. 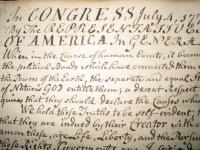 In 2009, the Town of Mendon, using $200,000 of CPA funds, $295,000 from the Land Bank account*, and a $500,000 MA LAND Grant, purchased the 60-acre former Chaleki property. The property is wooded, has excellent wildlife habitat, and includes the 9-acre Inman Pond and two streams. A conservation restriction on the property is held by the Trustees of Reservations. The open space contains BioMap2 Critical Natural Landscape. This area is now named Meadow Brook Woods. CLICK HERE for more Info on Trails

*The Land Bank account was created in 2000 using funds from an easement paid to the town by the ANP power station in Bellingham.
https://malegislature.gov/Laws/SessionLaws/Acts/2000/Chapter132

In 2010, $6,500 in CPA funding was used to restore an old cabin located at Meadow Brook Woods, along with countless hours of volunteer efforts of the Mendon Boy Scouts.

In 2011 $35,000 in CPA funds was spent to purchase the Paddock Property (74 Providence St.) in a bargain sale.  This land abuts other town-owned open space, Muddy Brook runs through the property (home to the threatened American Brook Lamprey) and it is a valuable wildlife habitat. The Metacomet Land Trust will hold a conservation restriction on the property. The open space contains BioMap2 Core Habitat and Critical Natural Landscape.

In 2011 $315,000 in CPA funds along with $200,000 from the Trustees of Reservations was spent to purchase the Nolet property.  The open space contains BioMap2 Critical Natural Landscape. This parcel was a keystone property, because it connected the 60-acre Meadow Brook Woods property to the 175- acre Trustees of Reservation Cormier Woods Farmstead property. The town owns 16 acres that was added to the Meadow Brook Woods property and TTOR kept 11 acres and added it to the Cormier Woods property.  This property features several miles of trails that are open for public use thanks to assistance from:

The Affordable Housing Coordinator (AHC) provides support services for affordable housing programs, projects and activities. The AHC is a resource for:

In 2013, $137,500 in CPA funding was used to re-build the playground at Memorial Park.  The existing facility was built in the 90's and had deteriorated over the years.  Thanks to CPA funds we were able to build a new, ADA compliant facility that will last for many years to come.

In 2013, the town spent $65,000 to make ADA repairs to town facilities.  ADA stands for Americans with Disabilities Act, and is the federal law that requires all buildings to be assessable to everyone.  Failure to comply with these regulations puts the town at risk of legal actions.

In 2014, $23,775 in CPA funds were spent to repair the 30 year old basketball court at Memorial Park.  This project involved sealing all existing cracks, replacing the hoops, and resurfacing the court.

In March of 2014, $8,400 in CPA Historical funding was used to fund an archeological reconnaissance survey of the town forest.  This survey was required as part of a $50,000 grant to enhance trails, identify historical sites, add signage, link trails add gates, and other improvements for tourism and recreation.

In 2014 $264,370 in CPA funding along with $315,630 from a MA LAND grant was spent to purchase the Gannet Property.  (79 Millville Rd & 17 Pleasant St)  A portion of this property has been designated by the state as critical natural landscape. In addition, the Massachusetts Audubon has designated some of the acreage as an important bird area and the Nature Conservancy has designated it as a terrestrial resilience corridor. It also has been identified in the state's Heritage Landscape Inventory and in the Blackstone Valley Prioritization Project as an area of high priority for protection.

The $280,000 in CPA funds were used to purchase a Conservation Restriction on the property that will protect the land in perpetuity.  The back portion of the land was purchased by the MA Dept. of Fisheries and Wildlife as open space.  Finally, the farm was purchased for $395,000 and will remain in operation as a farm rather then be turned into a subdivision.

2015 - Restoration of the Joy Fountain

In 2015 $1,000 in CPA Historic funds also with $1,000 from an insurance settlement  were spent to restore the Joy Fountain located at the intersection of Rt. 16 and North Ave.  Donated in 1877 by the widow of the late Honorable David Joy.  he fountain was badly damaged by multiple car accidents.  The fountain was relocated onto Founder's Park with the assistance of the Mendon Highway Dept.   In the spring additional restoration work will be performed and the fountain will be cleaned.

More Info and History of the Fountain

In June of 2016, renovations and repairs to the Memorial Park Tennis Courts were completed.  The newly restored courts are now open to the public.
The total project cost $88,350 and took 9 months to complete.  $50,000 of this project was funded through a PARC grant from the state and the remaining $38,350 was funded with Community Preservation.    The newly renovated courts feature an overlayment system, ProBounce, to restore an even playing surface.  This surface uses a synthetic material similar to artificial turf along with fillers and an acrylic top coat.  All existing cracks in the court surfaces were patched and the new membrane will bridge any future cracking.  The new surface is also softer than traditional concrete or asphalt surfaces resulting in fewer stress injuries and less player fatigue.  New nets were also installed.  The fence was repaired including new high strength mesh and added supports to improve durability.
More Info 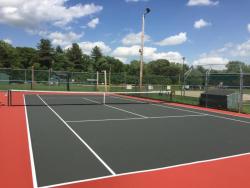 In 2017 Mendon voters approved a $5 million construction project to build a new police station.  The proposed location is the former fire station building located at 24 Main St. which has been sitting vacant for several years.  $1.5 million in Community Preservation Act Historical Funds will be used towards this project.  In 2019 the Town approved an additional $1.4M with an additional $400K from CPA Funds.  The old fire station was built in the 40's and is considered part of the historical town hall campus making a portion of this project eligible for Community Preservation Funds.  CPA funds will be used for the renovation to the original brick section of the building as well as repairing and repurposing several architectural features of the old building including the garage doors.
More information on this project can be found here: https://www.mendonpolice.com/stationproject.html

In 2021 Mendon voters approved $10,000 in Community Preservation Funds for engineering related to drainage improvements at the Town Beach.  Later in 2021, voters approved an additional $10,000 to complete those drainage improvements.  At the 2022 Annual Town Meeting voters approved $300,000 in Community Preservation Funds for landscape improvements and ADA upgrades to the Town Beach.  This work will include the complete replacement of the retaining walls, walkways, and playground.  The replacement of the fence and reconstructing the entrance to be ADA compliant. Work has started and is expected to be completed when the beach re-opens at the end of June 2023. 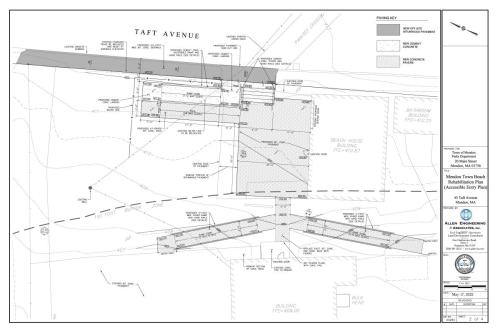